I got in last night around 9:30pm. The family was there to greet me but my luggage was not. Luckily there isn't anything that I absolutely need in that bag and they were able to confirm that it was still in Amsterdam and that it should arrive here sometime tonight.

The last few days over there were somewhat hectic because of the impending departure of three volunteers (myself included) and the upcoming celebration which effectively will shut down the project for five days or so. Those who remain there will be able to get all the data and records organized which will be very helpful.

Many things went very well during the last week. A few different groups visited our operation and they were very impressed with the work. Other groups were in the villages collecting blood lead data and doing other testing which is outside the scope of the remediation but very helpful in identifying what is going on with the lead in the villages.

The lead contamination in the villages is huge and off the scale of anything that has occurred here in the states with the exception of some superfund sites. The official numbers of deaths reported are likely low based on what we have heard in the villages. Many children have died and many are still sick. Kids in the villages have blood lead levels in excess of 100ug/dl which is way over any regulatory limit you will find in the states. So the damage has already been done to those kids. The work going on over there is to stop more damage from occuring.

Thanks to everyone who has taken the time to read this blog. I want to go back to be part of that work and part of that team. It wasn't scary at all, well except for the driving... The villagers were very friendly and helpful. The workers from the various groups in the country were all very talented. There is just no way to describe it all adequately. However, I came back with some Nigerian currency (naira) and as I was showing it to my family, I caught a whiff of the odor coming from the bills. Yep, I brought back the smell of Nigeria.
Posted by John at 8:54 AM 1 comment:

It is my last night here. Those of us leaving tomorrow are up late packing and finishing up work so others can pick up where we left off. The talent of those over here is amazing each in their own way.

As midnight hit a few minutes ago I headed to bed, walked outside and finally was able to take a few moments to stargaze in complete darkness. It has been a great trip.
Posted by John at 3:38 PM No comments:

Office with a view 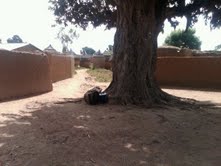 This has been one of my various offices for the past few weeks.  It is only another few days before my part in this ends. Until then I will keep enjoying this work as much as possible.
Posted by John at 5:03 AM 1 comment: 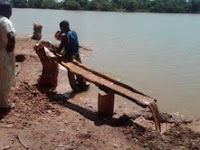 There is a large village with significant contamination in a ten acre area just on the edge of the village. It is a wonderland as far as playgrounds go and it is also along a section of river which has been dammed so it serves as a wash area too. Unfortunately it is full of piles of dirt in excess of 30000ppm lead. Yesterday when we stopped by some men were making new mud bricks out of soil dug from this area and mixed with some of the sandy processed ore. Today I shot them with the XRF and got 14000ppm in the nrovks which are used to construct the compounds. Sort of hard to do remediation work when they are still bringing the ore into their houses.
Posted by John at 8:44 AM 1 comment:

It is Sunday and we are all staying in the compound to work. There aren't enough computers for everyone so some of us are doing other things to help out whether shooting soil samples collected from the villages or looking over maps and trying to fine tune everything.

A boy in the village yesterday had some rodent traps and he sold me two for 10 naira. That is about 3 cents each. They are a piece ff wood with a rubber strip tied to one end and strings tied to the other with a small wood trigger. The rodent crawls through the loop, trips the trigger and the rubber strip strangles or breaks the neck of the rodent. It is pretty cool and we have them set up by the kitchen to catch a rat that has set up shop.
Posted by John at 12:59 PM No comments:

Give the kid the camera

If you want a different perspective on life in the village, find an older kid and teach them to use your  camera and let them carry it around for you for few hours. 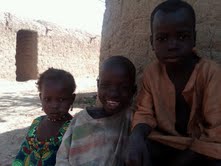 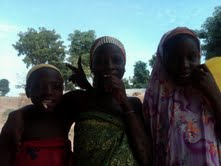 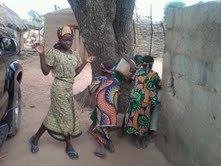 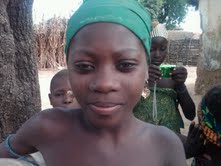 Today was the final day for the XRF at this village for exterior areas. The pattern in many of today's areas was higher concentrations in the shade and near the entry ways. The kids today were walking, sitting, playing and wrestling in areas with 4000ppm lead and up to 180ppm mercury. We try to communicate to the fathers, mothers, and kids to stay out of areas with really high levels but it doesn't seem to help. They really have a hard time with the concept of lead contamination.
Posted by John at 3:51 PM 1 comment:

We went out to the nice village this morning to finish up shooting interiors and to keep going on the exterior mapping. I worked with one of the new guys to orient him to the village and the upcoming remediation. We dove into things quickly and just worked for an hour or two. Then we regrouped and went at things from the perspective of what would be most useful to him now that he had an understanding of mapping, visual cues, and the progression of taking ore to gold. He picked things up very quickly and I think he will have no problem taking on this village as his baby to the end. I will drop in if he needs me to, but I don't expect that to be necessary.
I will head out to the far village again to map exteriors out there. We put together the village map and are ready to start shooting. We just have to wait for people to become available.
We did take a little time today to stop by the market. Talk about an assault on the senses...it was amazing. It is interesting the differences between a market in a small remote village and a large weekly market in a big village. I plan to go back to the small village market tomorrow.
Posted by John at 1:18 PM No comments: